Oh for the love of fleece!!

It's nearly everywhere I look!

Under the skirting table... 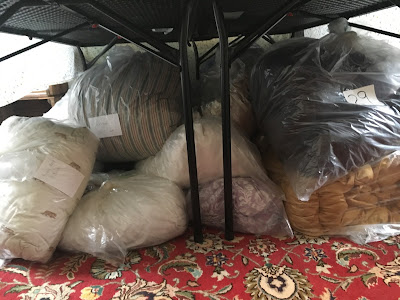 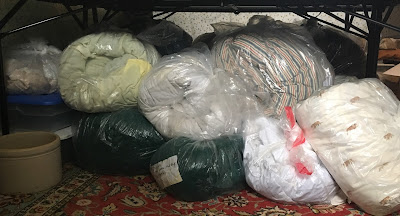 ...in the corner, because I can't mash anymore under the table...

...and all around the house in some stage or another.
There is fleece in the combing queue as well as some new ones
that need to be photographed and uploaded to my stash page on Ravelry.

Oh, and I think I may have bought two more ...
Yep, a California Red and a Golden Cormo from Apple Rose Farm!
Well...I've never had a California Red before...
so it makes sense that I should have one, right??

I recently went through the fine wool closet to check what's
still there and for any buggy activity...oy, so much wool!!

But who's complaining, even checking the closets is fun
as I get to visit with fleece I may not have seen for a while ;)

What's on the skirting table is what's next in line to be scoured.
(I prefer the term washed, actually, it sound less harsh).

Here's the latest fleece queue on the skirting table... 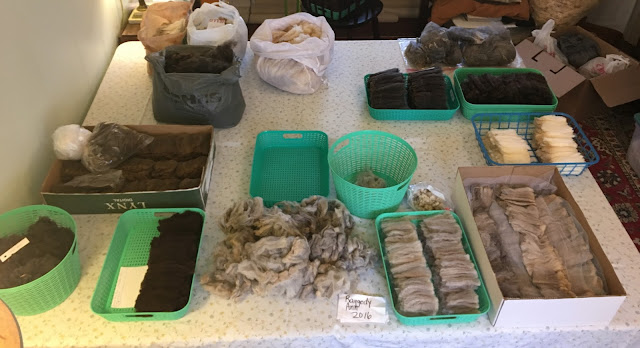 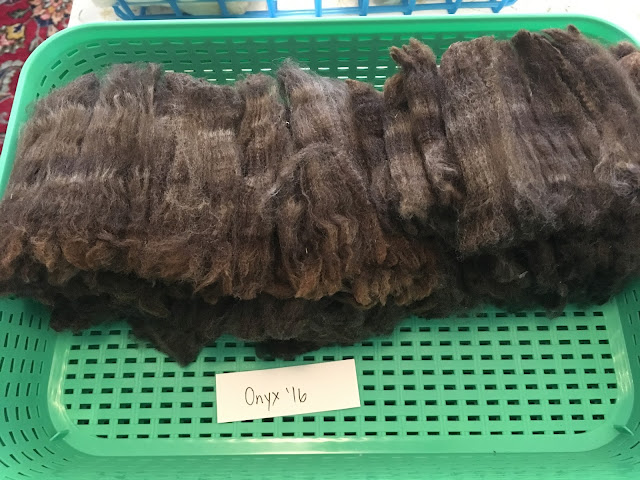 In my defense, it's a lot healthier than any other addiction I can think of.
And there will be something to show for each of these fleeces in time...a finished
garment of some kind, either knitted or woven. Nothing goes to waste!
(And I need fleece for classes too!)

So no doubt what's on my to do list today, and tomorrow, and the next day...LOL

I hope you find time to enjoy fiber today :)

Posted by Kimberly at 3:01 PM No comments:

Lots of Not Very Big Skeins !

I have this terrible habit of washing one batch of a new fleece,
processing and spinning a skein from that,
and then putting the fleece away to move on to another one.

I have way too many 'one skein wonders',
with either more washed or raw just waiting for me
to get back to it...
It's a bad habit I need to break!

I really wish just once that I could follow through
with the same fleece from washing to spinning all of it...
...in the same year!!

I just get so excited when I get a new fleece!!

I know it's fleece ADD, but really...
I know, I know, some people have oodles of started
knitting projects, waiting to be finished,
I don't usually have more than two knitting
projects on the needles at a time...
...with me, it's fleece.

Has been from the 1st time I laid my hands on a raw fleece.

One of my latest fleece purchases was from a fellow guild member
who raises Romney and Romney cross sheep.
We had been talking about her sheep and fleece
and I told her I might be interested in a raw fleece.

At one of the meetings, she had several bags in her truck...
very bad for me...

As an addict, I have a VERY hard time
saying 'oh, very nice fleece, bye".
It's usually, "oooooh, what pretty colors you have!
What's this one, a lamb fleece? Hmmmmm"

Yes, I carried that lamb fleece with me to my car...
...hanging head in shame, as I have no control...
like I need another fleece?

But I enjoyed that fleece smell all the way home...hahaha 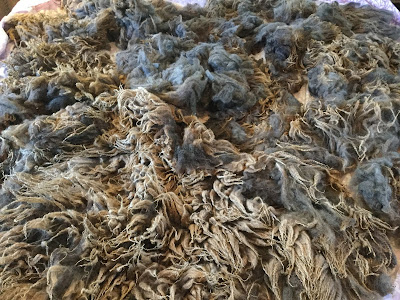 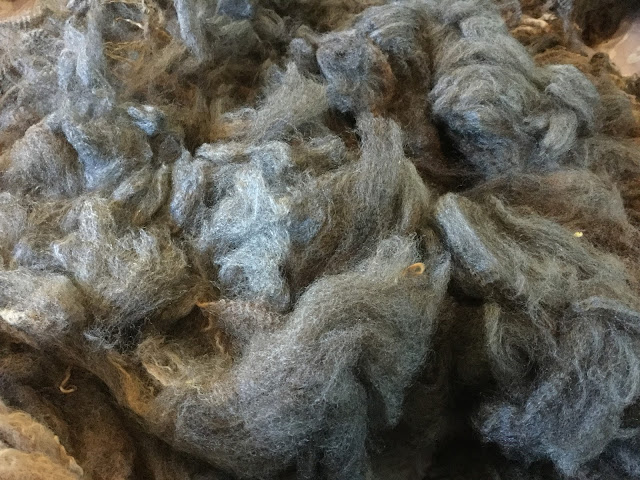 My friend who keeps the sheep is a one woman show when it comes
to their care and shearing.
She actually did a really good job with the shearing as I have come
across very few second cuts!

The tips are weathered, brown and stiff. 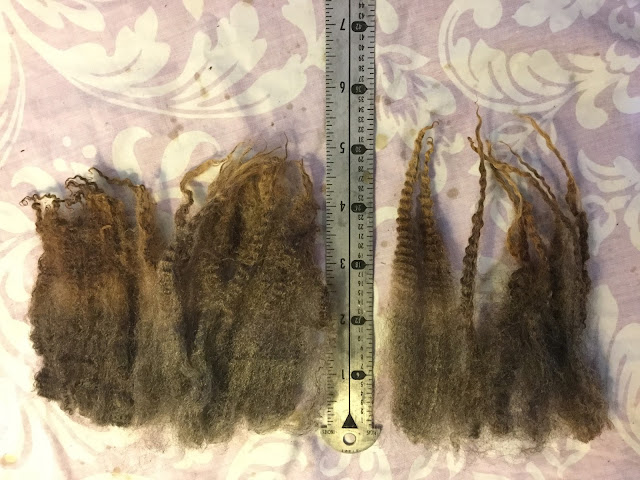 But below that, is a gorgeous medium grey color!
I have only washed about enough for one smallish skein... so far.
I decided to spin the whole lock, as opposed to cutting off the
weathered tips. 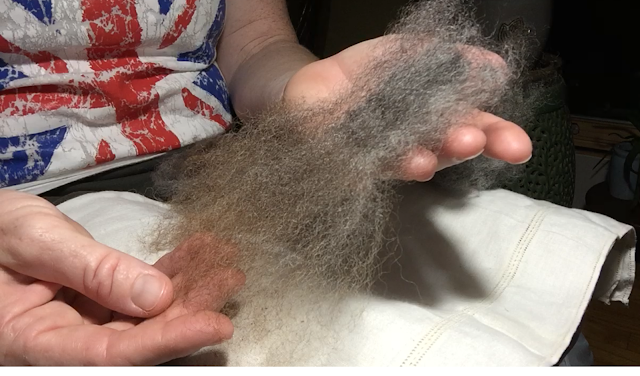 Then I proceeded to comb them on my Valkyrie Extrafine Combs. 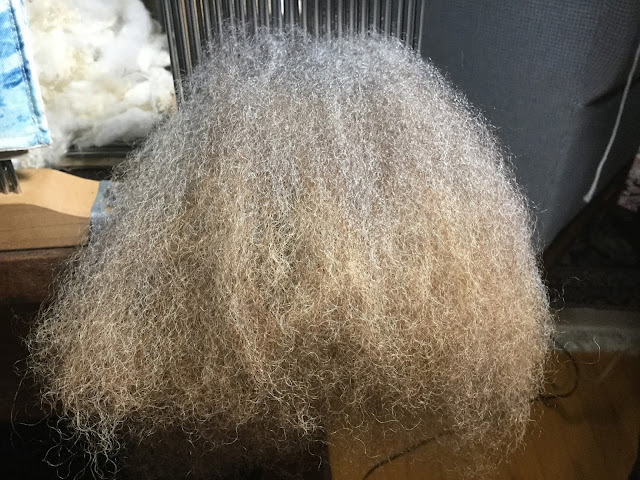 The top has these brown streaks in it from the brown tips.
I kinda like it! 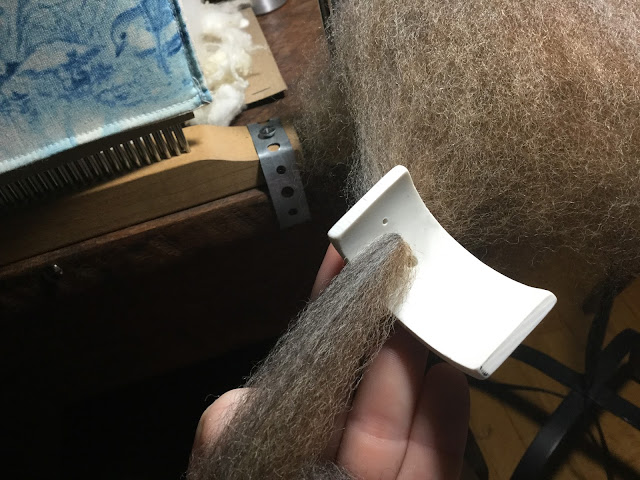 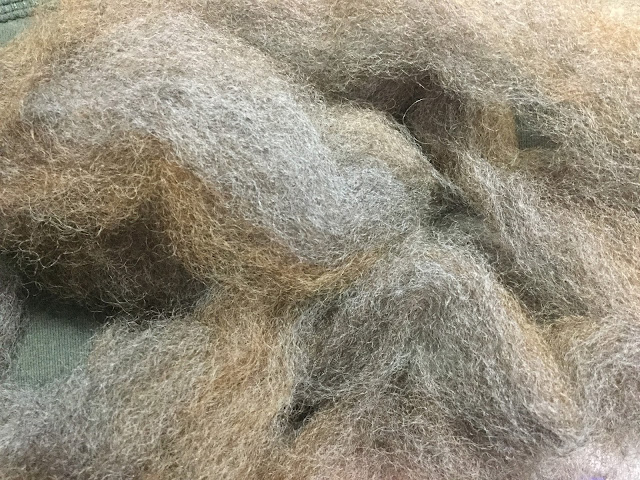 Made for some very interesting combed top! 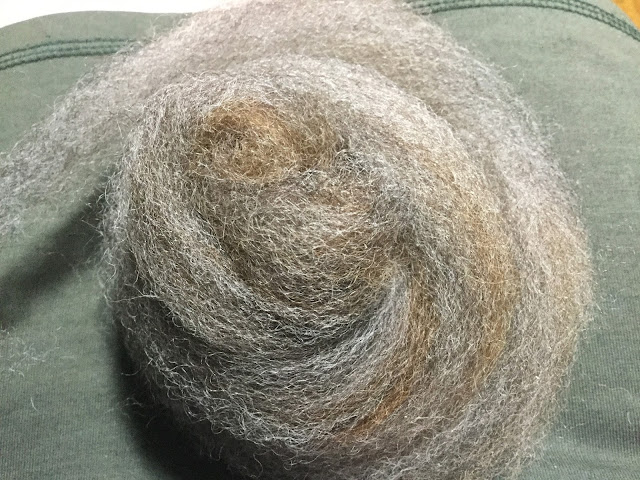 The finished skein weighs 1.8 ounces and is only about
88 yards long. Not a very big skein by most standards.

But it's nice, even and should make up into something interesting...
Maybe wrist warmers, or part of a hat...or ? 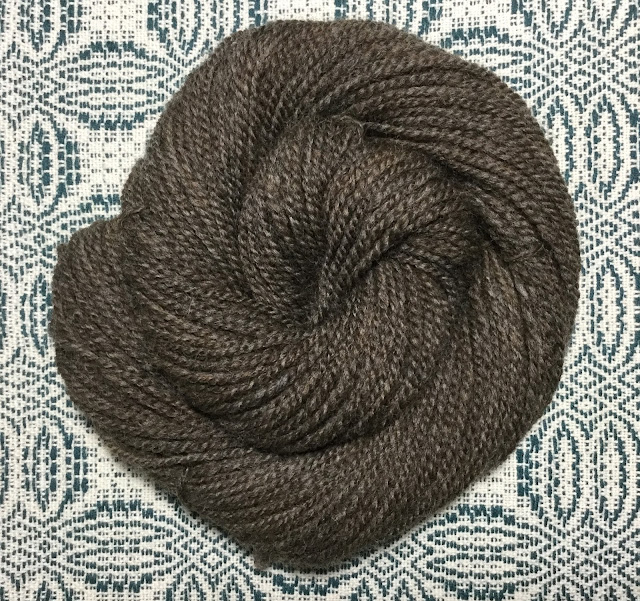 I gifted it to my friend who raised the sheep.
I like giving skeins back to the shepherds sometimes,
especially if they're just getting into spinning :)

I will snip the tips off the next time and see what that looks like.
It will be much more grey.

Hold on a minute, this gorgeous merino is calling me... 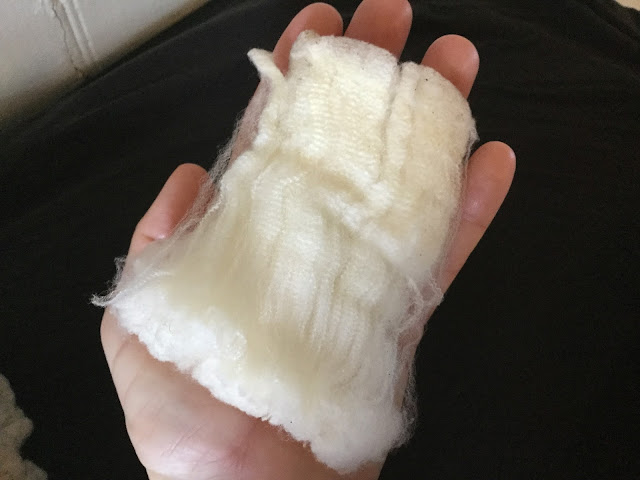 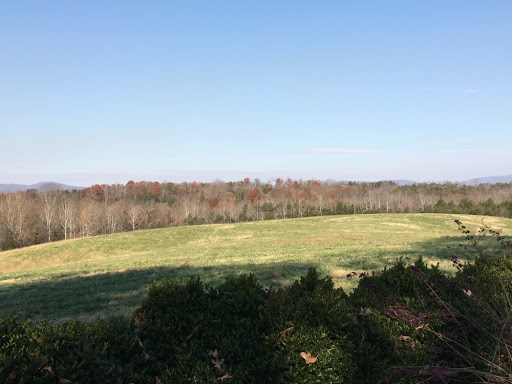 What do the weather forecasters know? (They threatened with a chance of rain)
Naught!

What a perfect day!

Was able to lounge in bed for a while this morning and check out a few blogs.
Then it was up and outside to clean out the chicken house, which for too many reasons I had been putting off.
Yesterday I picked up shavings and a nice bale of hay, which I think they appreciate in the cold weather.

While I was outside, I started smelling a skunk. There have been sitings in the yard in the past few months and one won't be coming back. They'll kill a chicken if they have the opportunity. I took a very careful walk around the yard to see if I spotted one. I didn't, thankfully, but I did take a few pics of the beautiful farm I am lucky enough to call home.

So I have many things to be thankful for...
A cozy, roomy home, big enough to house my fiber 'stuff' !
Beautiful views from every side of the house !
The perfect, sunny and not freezing day to do some much needed outdoor cleaning !
Plenty of wood for the winter, that we cut and split from right here on the farm !
An adorable man who is talented, sweet and loves me ! (Still can't figure out why ;)
I could go on, but you get the gist !
No complaints here...
Now to shower and work inside the house...maybe make some cookies...or bread...yes...bread..mmmmm
Or apple crisp!

Posted by Kimberly at 2:00 PM No comments: 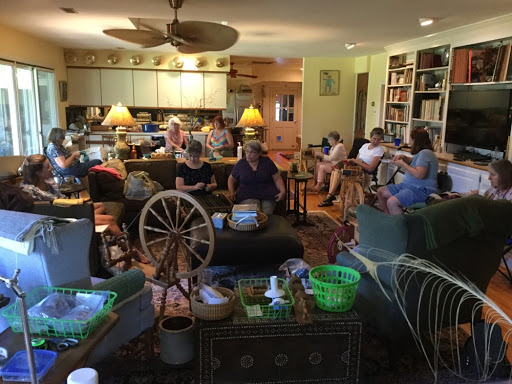 The 28th of August would have been Tasha's 101st Birthday!
It was my 7th year hosting a crafty get-together in her honor :)
It was too hot to have it comfortably outside, so this was the first time
I hosted it inside.There was knitting, spinning, weaving, eating, laughing...
just a good time had by all!! 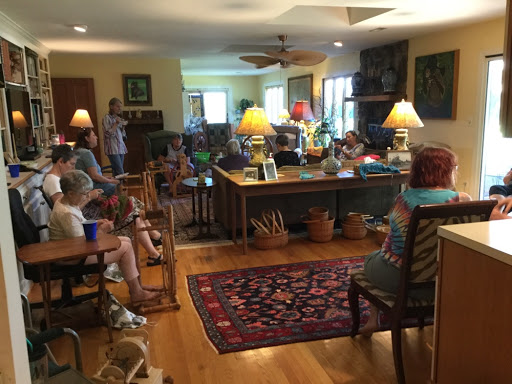 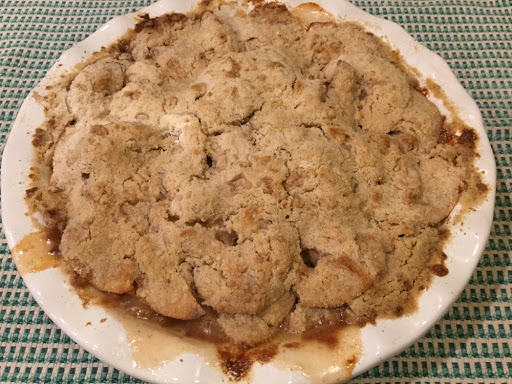 This has been one of those special desserts that goes back as far as my
earliest childhood memories. My mother made it and I learned from her. I don't
know exactly where the recipe originated. My copy is hand written on an index card.
If you do a search for apple crisp you will get many variations. Most I found
included brown sugar and oatmeal with various spice mixtures. Sometimes it
just needs to be kept simple. I think this is the simplest, most delicious
apple crisp recipe you will find anywhere!!

Give it a try and let me know what you think!

The topping consists of flour, sugar, salt, cinnamon & butter.
I usually make this first so that the apples won't have to sit and start browning.

You can tweak these to suit your tastes. I usually put more than a tsp of cinnamon because I really like it. You could use other spices or make it more or less sweet. Blend all of the dry ingredients together and then cut in the butter. It helps to slice the butter into several pieces before cutting. I mostly use a pastry cutter but you can use the two knife method and cut into the butter like scissors.  The butter pieces should be about pea size. Set it aside when mixed.

I have always traditionally used Macintosh apples. You can use any variety
you like but I think the tartness of the Macs goes well with the sweetness of the topping.

I used to use a knife to cut them but that took forever,
so I invested(all of about $20) in a manual peeler/slicer. 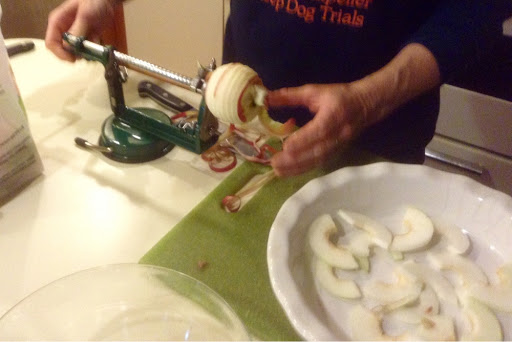 Get out your favorite pie dish and fill it about half way with your peeled & sliced apples. Add some topping to the apples. I do this because I always seem to end up with too much for just the top. Finish adding apples. Remember that the apples will cook down, so pile 'em high! 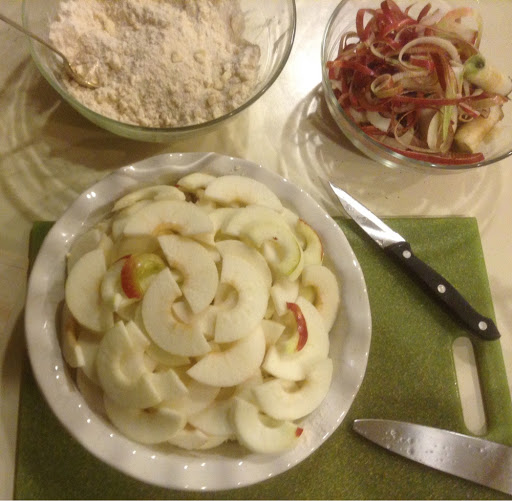 Finish it off with the remaining topping mix. If you slightly shake the pie dish,
it will settle the topping down into the apples a bit. Bake at 375 (pre-heated) for about 45 minutes. You may want to put foil or a cookie sheet on the rack underneath to keep any drippings from getting on the bottom of your stove. Cool on a wire rack for a little while. While it's cooling, I often go ahead and make fresh whipped cream to top it with. It makes it just perfect! Vanilla ice cream is good too!! 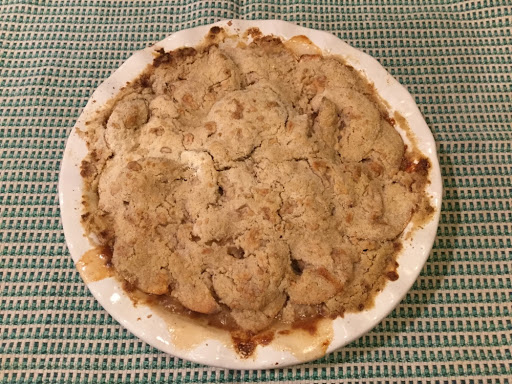 Posted by Kimberly at 7:54 AM No comments:

These Sites May Interest You...